This meal in a glass pear almond kale smoothie is a great way of using up any leftover greens and ticks off a portion of veggies before 9am!

Yes, yes, I know it’s December and I’m meant to be blogging Christmas recipes, but ya know this is my 7th year of blogging, and since I peaked with my short recipe ebook back in 2014, is there really anything else I can add to all the Christmas recipe noise?

I’ve been thinking about this a lot the last week, and realised that Christmas recipes are not really the core aim of Natural Kitchen Adventures. Christmas is about the classics, and well there’s plenty of them out there already. Yes I’ve been eating mince pies galore this last month, and yes I even made some myself, but in and amongst this I’ve just been cooking like I usually do, because man cannot live on advent calendar chocolate and mince pies alone.

So, this week I’m sharing a pear almond kale smoothie I’ve been making on repeat for the last few weeks, another excuse to show off my new Froothie Optimum 9400 2nd generation froothie blender that I have just reviewed.

I first came up with this smoothie recipe from a necessity of using up an excess of pears I bought for my autumn supper club pear and chocolate tart (someone  – err that would be me, did some bad maths).  I’m always very honest in saying that I am not regularly a smoothie girl, but the pears, they were getting a bit manky and a smoothie seemed like the best way to get through them over a couple of days. Smoothies seem to be something I only crave if I’m feeling a bit under the weather and my persistent colds of the autumn have left me feeling a bit less than 100% for quite some time.

Anyway, as we learned from my chocolate tart, pears go well with almond, so I used almond milk as the base for this smoothie. I also added a good portion of almond butter for additional almond flavour. I’m if going to go to the effort of making a smoothie for my breakfast, I don’t want to have to make anything else too, so I like to make my smoothies sustaining by making them a ‘meal in a glass’ smoothie – usually by also inviting oats to the party.

If you don’t want to put greens into your smoothie, there is absolutely no need and you are more than welcome to serve them for dinner instead. However, if you’ve got a top notch blender like me, it will make light work of making the texture of them disappear, just leaving you with a vibrant green colour. I’ve trialled this smoothie with curly kale, cavolo nero and chard too, all work brilliantly.

I always feel a little smug about having a portion of veggies ticked off for the day before 9am. 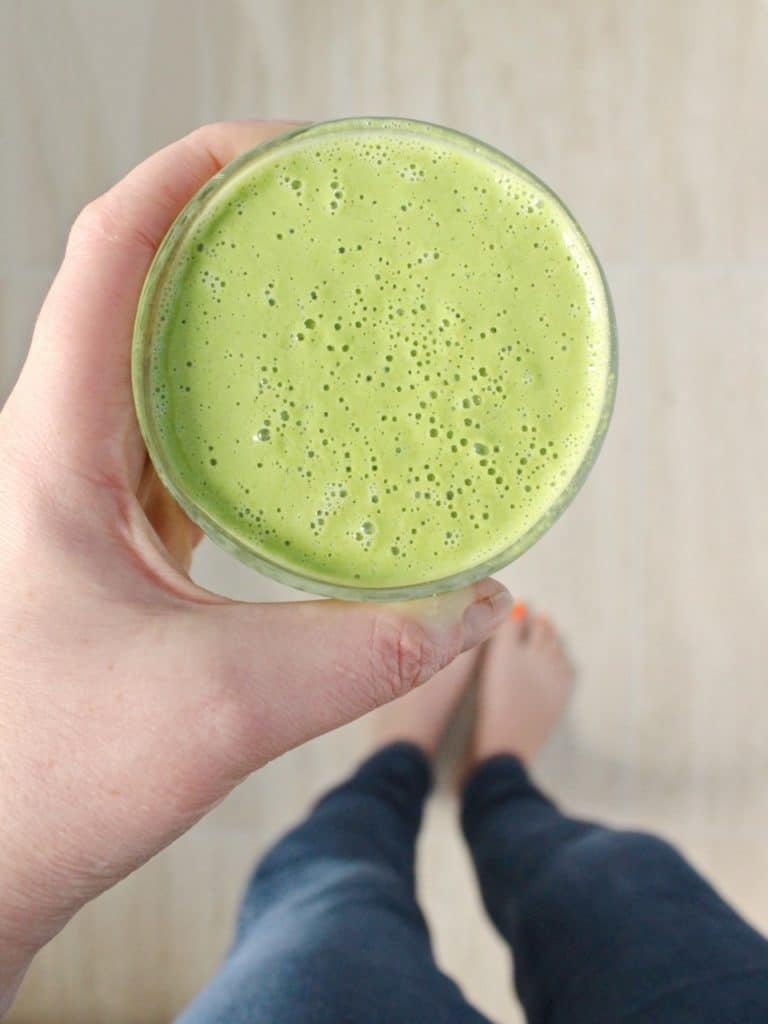 Print
Prep time
5 mins
Total time
5 mins
This meal in a glass pear, almond and kale smoothie is a great way of using up any leftover greens and ticks off a portion of veggies before 9am!
Author: Ceri Jones
Recipe type: Smoothie
Serves: 1
Ingredients
Instructions
3.2.2802

Disclosure: I am now an ambassador for Froothie and some links in this article may be affiliate links. The above product reviews is, as always based on my honest opinion. If you’d like to know more about Froothie health products, or this machine in particular, please visit the Froothie Website for more details. Any purchases made through this/these link(s) are at no extra cost to you but give Natural Kitchen Adventures a small commission. Thanks!