A gluten free recipe for a Breton inspired buckwheat galette. Cheese, ham and an egg is usually called a galette complète – I have used French Comté cheese. 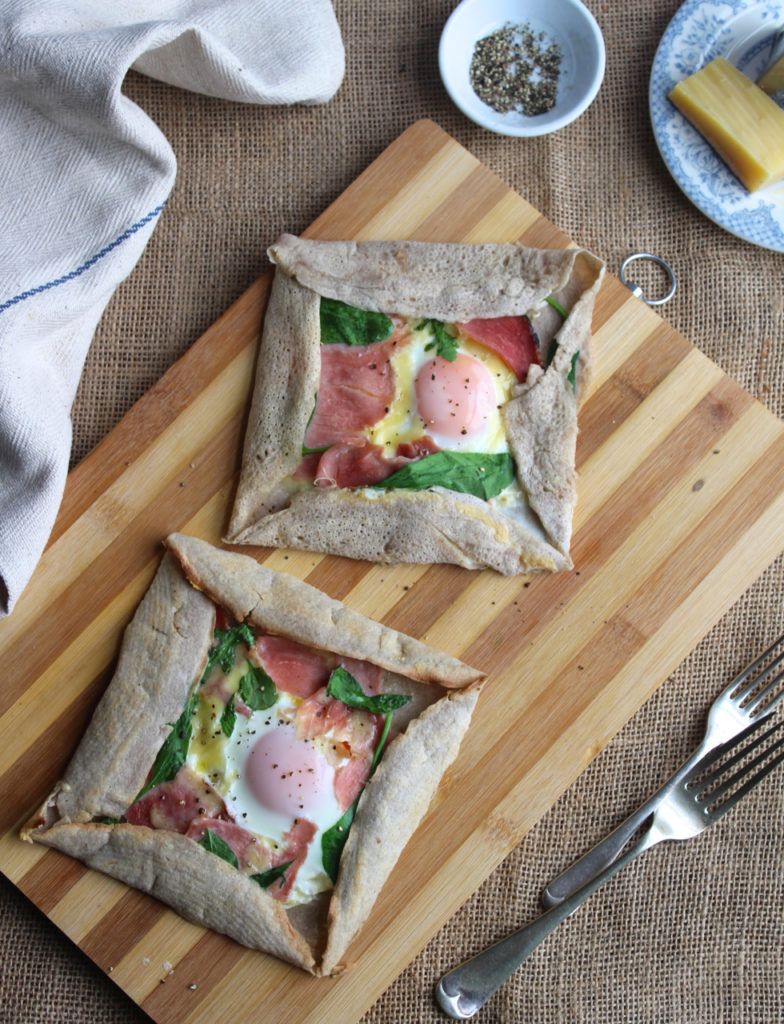 Whilst eating a melted cheese and ham monster of a galette a few weeks back it struck me this was possibly the nearest thing to a cheese toasty I had devoured in years.

It then may not surprise you that Buckwheat galettes are one of my favourite discoveries from recent years.  Not just in Paris, but because they are also a street food stalwart here in London.  I’m always thrilled when a galette van pops up at an outdoor market or feast because ladies and gentlemen – there isn’t always an abundance of gluten free or vaguely healthy street food eats.  My favourite galettes in London are by Suzette Crêperie who trade at my local Brockley Market.  Making these at home is not quite the same as from a stall given the lack of crepe hot plate in my kitchen but this is a fairly good half way house for when galette cravings strike and a street food market is no where to be seen!

Galettes hail from the Brittany region of France, and like bread were historically a very basic food item.  I find it really interesting that so many cultures beyond the UK have a version of flatbread as part of their peasantry cuisine, and that many of them are naturally gluten free such as socca in South France or Injera from Eritrea!  Oi – Great Britian, where is ours?

The recipe for the traditional galette couldn’t be simpler – just buckwheat flour, water and salt.  I initially came to the quantities in my own recipe by using this recipe as a guide, then needing to add more water for a looser consistency. However I quickly discovered without a crepe hot plate and just a large frying pan the simple version was a bit difficult to work with so I eventually opted to add an egg into the batter for its binding properties – I’m not the first to have unauthentically done this! Either way you will probably end up chucking away the first galette  so don’t get disheartened.

As for fillings there is so much you can add.  Any combination of cheese, ham, egg or will, or something far more elaborate with goats cheese and other vegetables.  I opted for some honey roast ham, French Comté cheese, spinach and an egg too of course – more filling and it photographs better with lots of colour.

The cooking method for this is entirely different to what you would find in a crêperie, but through many experiments I have found this to be the most reliable method.Instead of folding in the edges you can also fold the crepe in half, then half again, wrap in paper and devour without the need for a knife and fork.

Disclosure: I was commissioned to write this recipe for the Expedia French World on a Plate challenge.