A bowl full of tradition 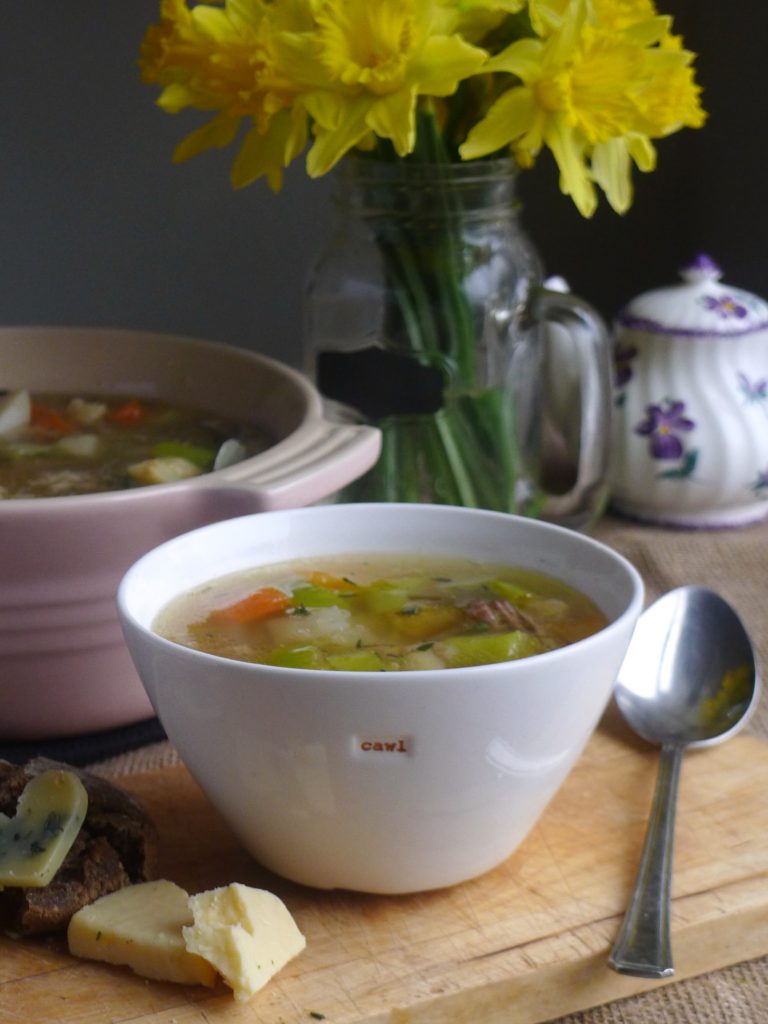 Cawl is a thrifty traditional Welsh soup dish, dating back to the 14th Century. Recipes vary from kitchen to kitchen in Wales, and are often passed down through families. It is really very simple – a soup made from a cheap cut of red meat stewed slowly with winter root vegetables, historically in a cauldron over an open fire.

But, oh, it is so much more than a simple soup – ask ANY Welsh person. I am Welsh. My parents, and their parents were Welsh, I went to university in Wales, am a huge supporter of the Welsh rubgy team, and consider it a mere technicality that I was born and brought up in Surrey, England. I didn’t grow up eating Cawl, I wish I could ask my mother why. But I discussed this with my siblings, and we reasoned that either Mum didn’t like Cawl, or she assumed that we wouldn’t eat it and therefore didn’t make it.

Cawl tastes way better than it looks, so maybe the latter is true. I have vague memories of Mamgu Wales (my Welsh grandma, I also had a Mamgu London) making it on one of our holiday visits. Because Cawl is a simple, traditional food, recipes are usually more a guide than a strict set of ingredients and instructions. So before cooking my own version I consulted all of my Welsh cookbooks and a number of Welsh friends. Should I use lamb shoulder, neck, chops, beef brisket, or salty bacon? Should I add cabbage? Of course, I had to have leeks. Most definitely leeks. It’s not Cawl without leeks. Should I cook on the stove or in the slow cooker? Whatever I decided, I must eat the Cawl with bread and butter and a hunk of strong cheese, that was certain. Of course, everyone has a different memory – but nearly all brought fond smiles of shared family meals. 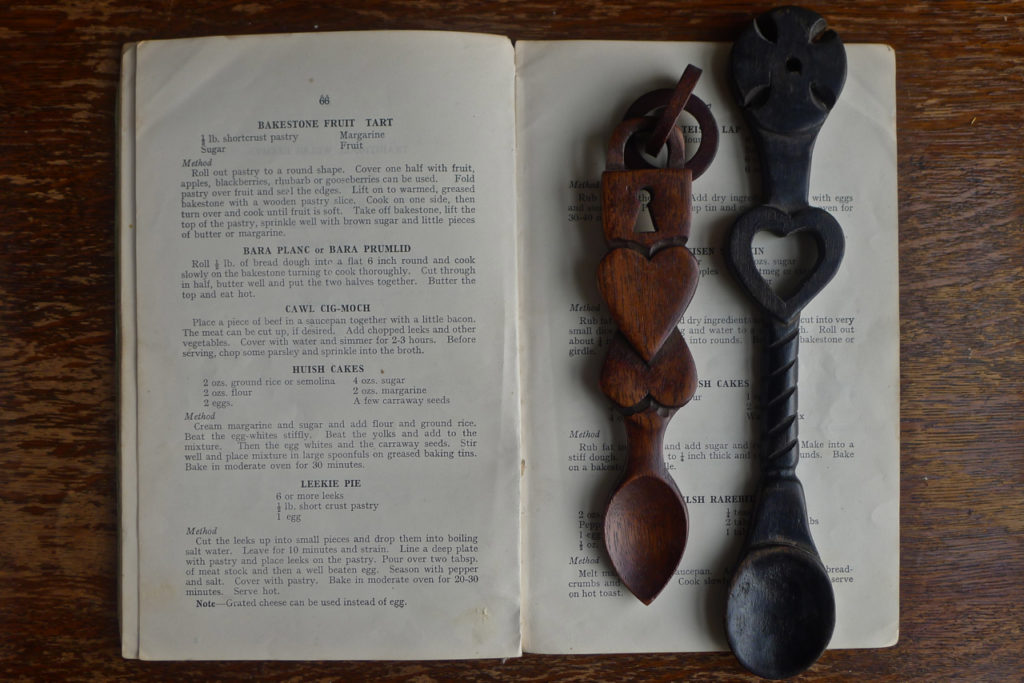 Traditionally the choice of meat depended on what was available, however it was always an economical cut which required long slow cooking. Cawl isn’t really a meaty dish, the meat is there to flavour the broth. Sometimes the meat isn’t even eaten with the soup, it could be fished out kept for another meal. Very thrifty. The cooking method for this dish is proof that old traditional diets were often intuitively very good for you. I doubt the Celtic mothers were consciously aware of the exact science behind nutritional broths – or that in 2015 they would become the height of nutritional trendiness. By slow cooking the lamb, the stock is enriched with the nutrients from the meat, bones and cartilage – especially gelatin, which has a multitude of health benefits particularly supporting poor digestion. The neck is a tough cut of meat, and slow cooking breaks down the tough tissue and collagen, making the meat easier to digest. So here I present you with MY Welsh Cawl, in a beautiful cawl bowl, served with bread and butter, and a smidge of cheese, daffodils on the side. But please, don’t eat the daffodils. So much more than soup. A bowl full of tradition 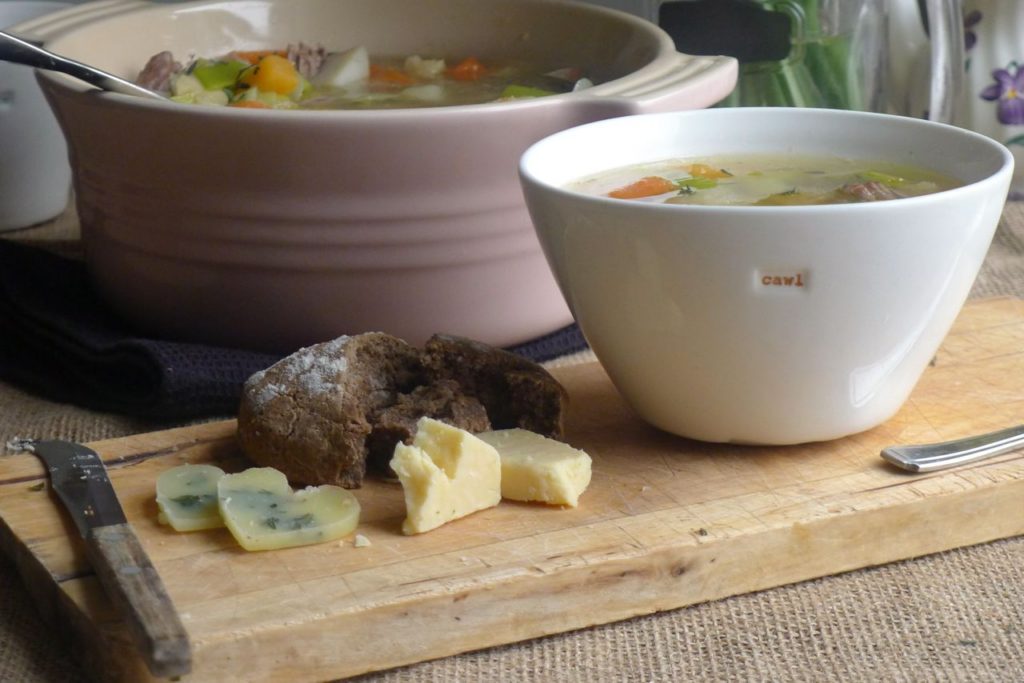 With that all important bread, butter and hunk of cheese

Print
Prep time
10 mins
Cook time
3 hours
Total time
3 hours 10 mins
Cawl is a thrifty traditional Welsh soup dish, full of tradition – recipes are often passed down through families. It is a very simple soup made from a cheap cut of bone-in red meat stewed slowly with winter root vegetables, with leeks added at the end.
Author: Ceri Jones
Recipe type: Soup / Stew
Cuisine: Welsh
Serves: 5-6
Ingredients
Instructions
Notes
* Lamb neck can be substituted for other cuts – such as shoulder or even chops, but a better taste is achieved when the bone goes in the stew too
3.5.3251
Do you have any traditional nationalistic recipes that are special to you?