This curly kale spelt spaghetti is a vegetarian simple supper dish and makes kale* the star of the show. 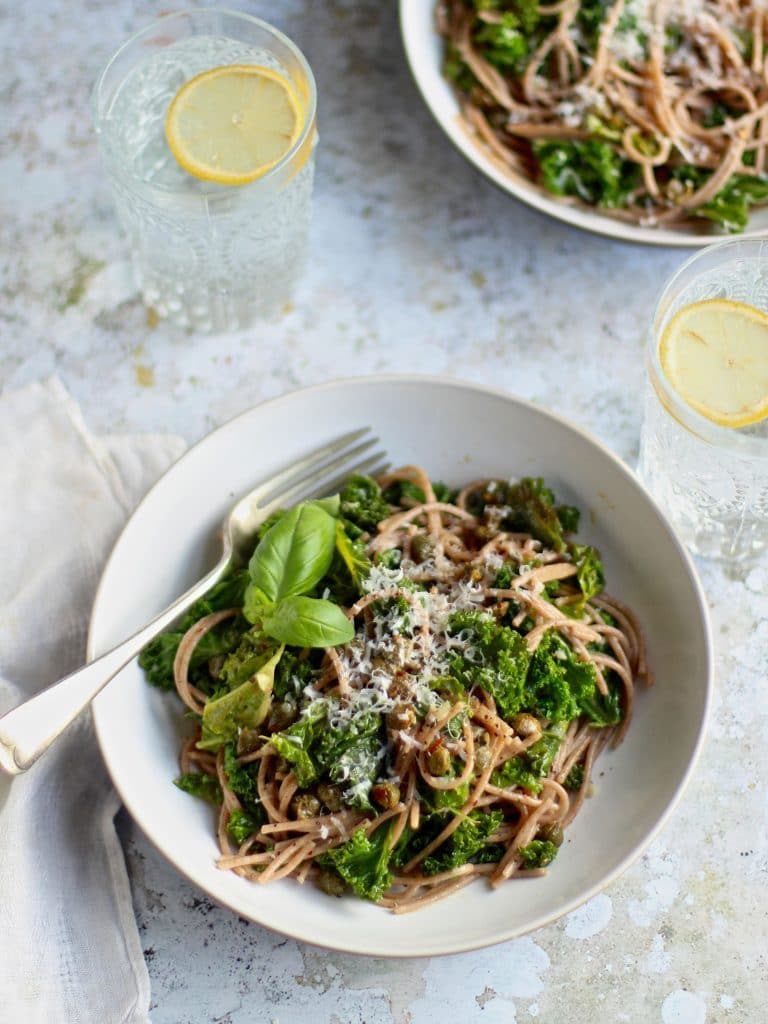 It’s hard to believe that just 5-6 years ago I’d never really tried the stuff.  Before then, green veg usually meant lettuce or rocket on repeat and that was about as diverse as it got.  Kale’s popularity has grown in my kitchen as well as across the world in the last few years, there is no escaping it.  We’ve all rejoiced in its versatility as an ingredient for salads, stews, curries, juices and smoothies, pesto and now adding nutritious deliciousness to a simple kale spelt spaghetti dish.

According to the folks at Discover Kale “Portion for portion, kale is hard to beat when it comes to the number of nutrients it contains and a great choice for those wanting to enjoy a healthy balanced diet.” Further more since the majority of curly kale sold commercially in the UK has been grown by farmers in Lincolnshire, its a top choice for eating locally, and seasonally too. Kale’s season in the UK starts to come in September, is in full force from October through to February and then tails off by April.  Of course there are always seasonal variations due to weather and growing conditions, but we’re pretty lucky for it to be a fairly hardy crop to take us through the autumn and winter.  Kale is often sold ready chopped in store for ease of use, making it a perfect ingredient for a quick weeknight supper dish. 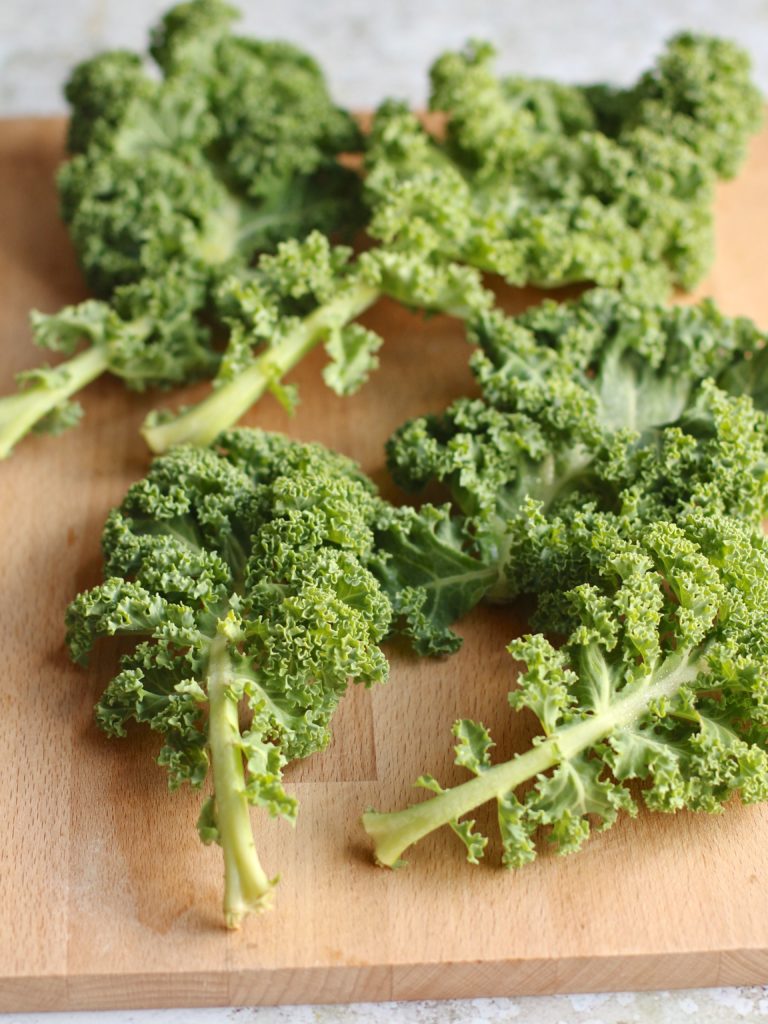 I’m using curly kale with my spelt spaghetti today, though have to say I am partial to its cousin cavolo nero also.  This kale spelt spaghetti is totally indicative of something I might throw together for a mid week supper.  It’s pretty simple, low fuss and doesn’t take up too much time.  These kind of dishes don’t often make it up onto the blog as I worry they’re not fancy enough, or maybe you lovely lot don’t mind at all and find this simple way of cooking just as enjoyable as I do.

You see, I grew up in the era when British households discovered pasta as the perfect mid week meal.  I couldn’t get enough of the stuff.  My Mum would make it for us a few times a week, and when I moved out on my own into the big wide world I carried this with me.  Unfortunately after that we moved into an era when carbs and grains got told to go and sit on the naughty step, and thankfully, since that era is over (well in my kitchen at least), the simple humble mid week pasta dish is back on the menu. Sometimes I use brown rice pasta, sometimes spelt, and goodness gracious sometimes when I eat in a restaurant I eat white pasta too.  Today I’m using wholegrain spelt spaghetti, it contains a good dose of fibre compared to white pasta, and with a nutty taste, it stands up well to an oily sauce.  Spelt is an ancient variety of wheat, and generally has lower amounts of gluten then wholewheat.  A  healthier pasta to pair up with my healthy kale?  Yes please.

There are so many Italian recipes for pasta based on a few key ingredients cacio e pepe (cheese and black pepper), aglio e olio (garlic and oil), to name a few, and my recipe using sautéed kale and crispy capers fried in chilli and oil is a homage to their simplicity and deliciousness.

If you want to get things a bit more exotic, some tinned sardines or pine nuts would go well in here too. 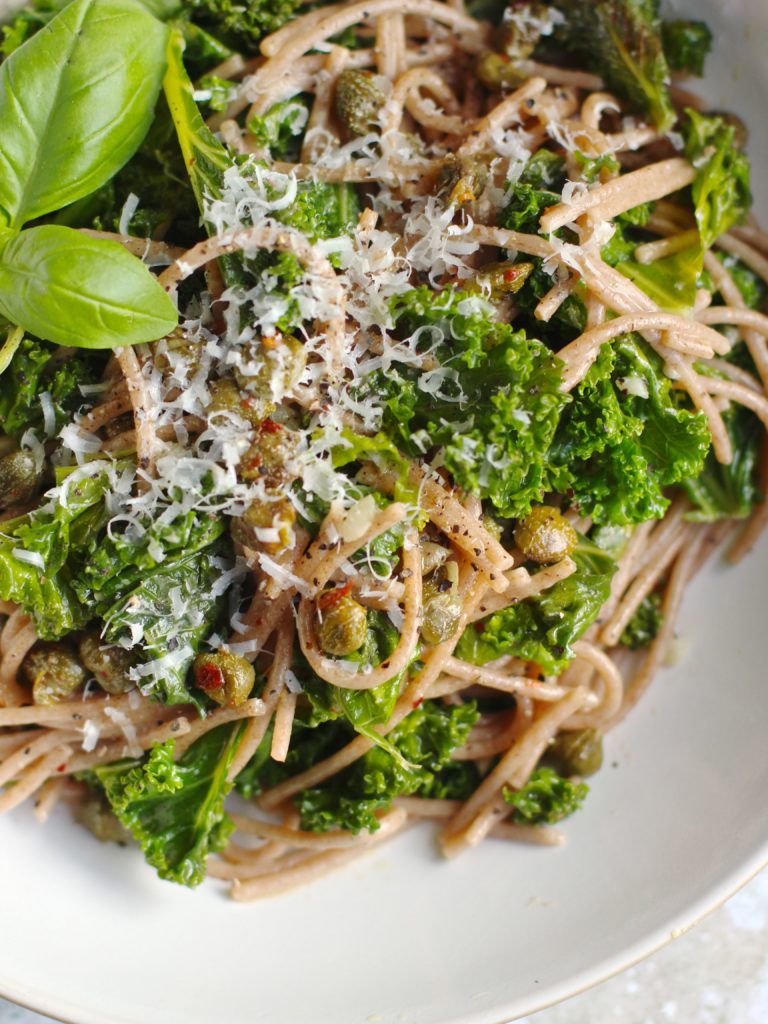 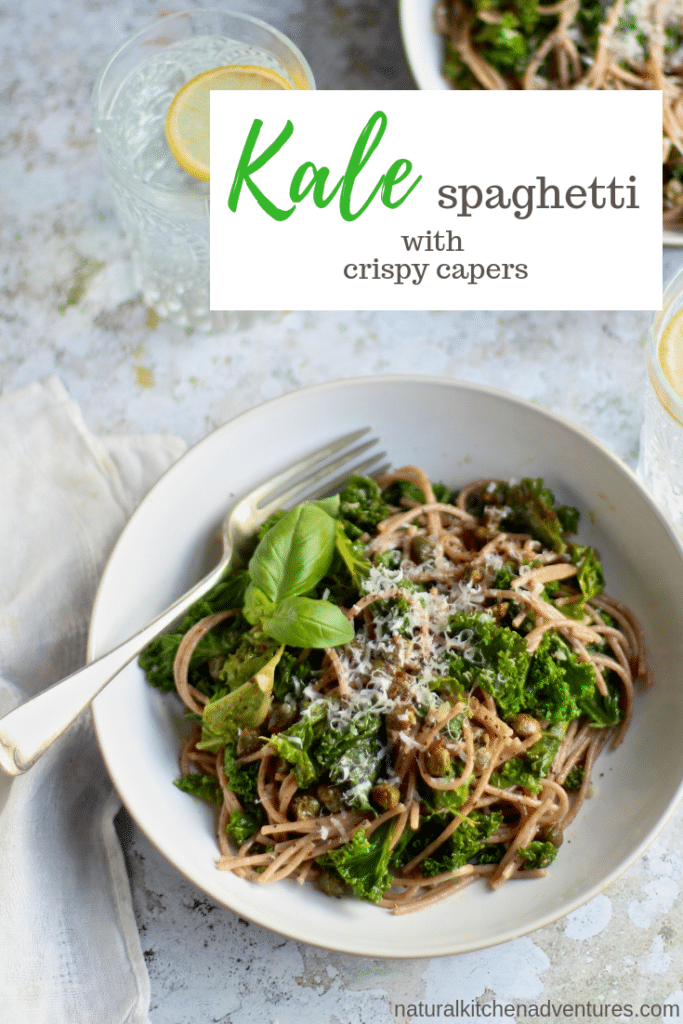 I have entered this into Recipe of the Week.

*Disclaimer:  This post and recipe was commissioned by Discover Kale.  Thank you for supporting the brands and campaigns who help make it possible for me to continue developing and sharing recipes on Natural Kitchen Adventures.